The Classic Global Flood Theory of Whitcomb and Morris

In 1961, John Whitcomb and Henry Morris published The Genesis Flood,

launching the current young-earth creationist movement. This post summarizes five of the book’s most significant claims, particularly its claim to show fossil evidence of humans and dinosaurs living together. Whitcomb and Morris argued:

1) Opposition to Uniformitarianism: Uniformitarianism is the principle that the processes of today should be used to interpret the past. Applied to geology, it implies that the geological formations were formed gradually over immense periods of time. Whitcomb and Morris argued the presupposition of uniformitarianism hopelessly biased modern geological theory so that geologists fail to see the clear evidences for the global catastrophe that occurred during Noah’s day (130-42). They further contended that this current blindness on the part of the geological profession is a fulfillment of the apostle Peter’s prophecy of apostasy during the latter days (2 Peter 3:3-7) (451-54). In this way, flood geology and young-earth creationism fit very well within the premillennial worldview of classic Dispensationalism which dominated evangelical thinking for much of the 20th century.

2) 2nd Law of Thermodynamics as an Effect of the Curse: One of the most fundamental laws of nature is the second law of thermodynamics, otherwise known as entropy. It is the principle that nature has the tendency to move from a state of higher order to a lower state. In short, entropy is the phenomena of everything running down. Whitcomb and Morris interpreted the Genesis account to teach that the universe was originally created perfect: no death, decay, or deterioration. This, to them, does not seem to be compatible with entropy, so Whitcomb and Morris suggested that the second law came into effect when God cursed the earth for Adam’s sake (225-27).

3) The Canopy Theory: The creation account (Gen 1:6) speaks of God separating the waters above the firmament from the waters below the firmament. Whitcomb and Morris interpreted this to teach that God place a vapor canopy above the atmosphere (239-43). 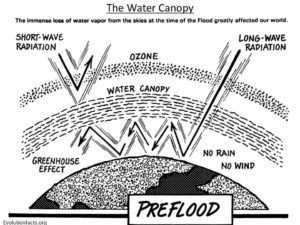 This canopy provided the waters that inundated the world during Noah’s flood. Whitcomb and Morris argued that the vapor covering provided by the canopy created a very different environment for the pre-flood world from that of the present world (243-58). The blanket of water produced a very favorable greenhouse effect that created a moderate climate worldwide. They interpreted Gen 2:5-6 to teach that it in those days it did not rain, and suggest that the vapor canopy provided the mist mentioned. In addition, the canopy acted as a protection from cosmic rays, which perhaps accounted for the remarkably long lives listed in the genealogies of Gen 4-5.

4) Rejection of the Geological Column: Whitcomb and Morris argued that the geological column, with its strata and layers, was created by the flood waters of the Deluge. Rather than giving evidence of great periods of time, the layers testify to different phases of the waters rising, cresting and receding. They pointed to “frequent flagrant contradictions to the established geologic time sequences” and to inversions in the geological column in which the supposed ages are out of order.

They concluded that the “geologic time scale is an extremely fragile foundation on which a tremendous and unwieldy superstructure of interpretation has been erected” (209). The world underwent dramatic transformation during and immediately after Noah’s flood, with the world’s mountain ranges being formed as the waters receded (141-53).. In addition, the ice age, if it happened at all, occurred almost immediately after the Deluge (288-303).

5) Dinosaur and Human Fossils Together: A centerpiece to the cumulative case presented made in The Genesis Flood was the fossils found in a limestone bed of the Paluxy River near Glen Rose, Texas. Whitcomb and Morris presented photographs of what appeared to be fossilized impressions of dinosaurs and human footprints side by side. This evidence, they argued, overturned the conventional interpretation of geological history that the era of dinosaurs and the time of humans were separated by millions of years.

Under the photos they declared,

“These tracks were both cut from the Paluxy River Bed near Glen Rose, Texas, in supposedly Cretaceous strata, plainly disproving the evolutionist’s contention that the dinosaurs were extinct some 70 million years before man “evolved.” Geologists have rejected this evidence, however, preferring to believe that the human footprints were carved by some modern artist, while at the same time accepting the dinosaur footprints as genuine. If anything, the dinosaur prints look more “artificial” than the human, but the genuineness of neither would be questioned at all were it not for the geologically sacrosanct evolutionary time-scale.” (174-75)

This was a spectacular piece of evidence. The photos of the fossils played no small part in convincing many readers of the feasibility of Whitcomb and Morris’ thesis. An article in Scientific American predicted that “all the geologists will resign their jobs and take up truck driving” if the prints were found to be genuine (Numbers: 1992, 121-23). By providing a robust creationist model combined with exhibits such as the Paluxy River footprints, The Genesis Flood has had a powerful impact among conservative evangelicals. Unfortunately, as YEC proponent Paul Garner acknowledges, “not all of the ideas of the book have stood the test of time” —including, as we will see, the Paluxy footprints (Garner: 2009, 183).

(The above is an excerpt from 40 Questions about Creation and Evolution, coauthored by Mark Rooker and me. Part 3 will examine Andrew Snelling’s updated version of the global flood model.) 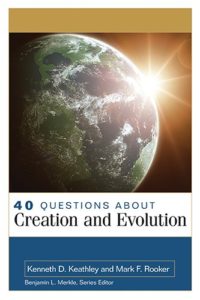 Was There Animal Death Before the Fall?

As we begin to see reports of #HurricaneIan's devastation in Florida, this old article from @penyjane came to mind.

She and @ken_keathley lost just about everything in Hurricane Katrina.

Check out this exciting conference from our sister center, @PastorsCenter! https://twitter.com/PastorsCenter/status/1575128745496674306

Oh my goodness this is beautiful.