Salvation and Sovereignty – A Molinist Approach 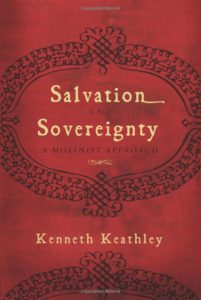 In Salvation and Sovereignty, Kenneth Keathley asks, “What shall a Christian do who is convinced of certain central tenets of Calvinism but not its corollaries?” He then writes, “I see salvation as a sovereign work of grace but suspect that the usual Calvinist understanding of sovereignty (that God is the cause of all things) is not sustained by the biblical witness as a whole.” Aiming to resolve this matter, the author argues that just three of Calvinism’s five TULIP points can be defended scripturally and instead builds on the ROSES acronym first presented by Timothy George (Radical depravity, Overcoming grace, Sovereign election, Eternal life,Singular redemption). In relation, Keathley looks at salvation and sovereignty through the lens of Molinism, a doctrine named after Luis Molina (1535-1600) that is based on a strong notion of God’s control and an equally firm affirmation of human freedom.