Imagine that you were called to minister to Nazi war criminals. That’s exactly what happened to Henry Gerecke, a Lutheran minister enlisted (at the age of fifty!) as an Army chaplain during World War II. At the war’s end, when other soldiers were coming home, Gerecke was called to the most difficult ministry assignment imaginable: to serve as chaplain to the twenty-one Nazis leaders awaiting trial at Nuremburg.

On January 14th I had the privilege of preaching at NewSong Church in San Dimas, California. The church’s theme was “On Mission” and I was glad to speak on the topic. Preaching from Luke 5:27-37 on the conversion of Levi the tax collector, I spoke about the Gospel’s radical agenda. I presented Gerecke’s assignment as an example of how Jesus’ call is much more revolutionary than we expect, so far-reaching that the only way we can obey it is by his grace. You can listen to the message here. 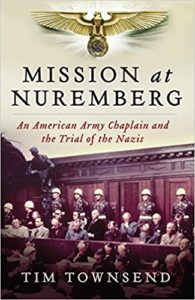 , Mission at Nuremberg: An American Army Chaplain and the Trial of the Nazis. How well did Gerecke fulfill his task? During the trial, a rumor passed around that Gerecke’s wife was demanding that he come home (he hadn’t had the opportunity to return to America in over two years). The Nuremberg defendants wrote the following letter:

“Frau Gerecke,
Your husband Pastor Gerecke has been taking religious care of the undersigned defendants during the Nuremberg trial. He has been doing so for more than half a year. We now have heard, dear Mrs. Gerecke, that you wish to see him back home after his absence of several years. Because we also have wives and children we understand this wish of yours very well.

Nevertheless we are asking you to put off your wish to gather your family around you at home for a little time. Please consider that we cannot miss your husband now. During the past months he has shown us uncompromising friendliness of such a kind, that he has become indispensable for us….

Our dear Chaplain Gerecke is necessary for us not only as a minister but also as the thoroughly good man that he is— surely we need not describe him as such to his own wife. We simply have come to love him….

It is impossible for any other man than him to break through the walls that have been built up around us, in a spiritual sense even stronger than in a material one.

Therefore, please leave him with us. Certainly you will bring this sacrifice and we shall be deeply indebted to you. We send our best wishes for you and your family!

All twenty-one defendants signed the letter.

Henry Gerecke demonstrates that God sometimes calls us to radical tasks beyond our abilities, but he also enables and sustains us through the task (2 Cor 12:9). The Gospel’s agenda is much more radical that we give it credit.

The Distanciation of Ernest Christian

The Art of Dying

Great to have fellow ⁦@Cardinals⁩ fan ⁦⁦@bartbarber⁩ on this week’s ⁦@SEBTSBushCenter⁩ podcast. He knows when to laugh and when to be serious. https://podcasts.apple.com/us/podcast/christ-and-culture/id1524310319?i=1000596886541

This convo runs the gamut of topics from theological method to Baptist history to the Lord's Supper.

And there's an added bonus where we talk about the importance of women studying in theological education!

Make Birth Free movement? As someone who in 45 days starts receiving Medicare, I don't feel I'm in a position to pontificate about the encroaching evils of socialized medicine. Time for us to put our money where our pro-life mouth is?
https://www.christianitytoday.com/ct/2023/january-web-only/make-birth-free-pro-life-proposal-roe-anniversary-christian.html?share=fxDxy63rEmfaJttH%2bFIUqlkYXO3xzyDw&utm_medium=widgetsocial via @CTMagazine