Guy Davies, in a recent article in Spectator, compares the two great dsytopian books of the 20th century–George Orwell’s 1984 and Aldous Huxley’s Brave New World. He makes the convincing case that though most people are more familiar with Orwell’s work than Huxley’s, it is Huxley’s nightmare that has turned out to be the most prophetic. I would nuance his argument to say that while communist governments took the 1984 route, western democracies have emulated Brave New World.

Orwell’s vision was of a totalitarian regime that controls everything in a top-down, suffocating, surveillance state. 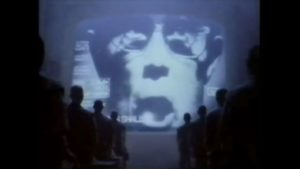 Big Brother is everything, everywhere, and always watching. Real world versions were Stalin’s Soviet Union, Hitler’s Nazi Germany, and Mao’s China. Consider communist East Germany in the 1980s. In a population of 18 million perhaps 1/2 million were informants for the country’s secret police. Today North Korea serves as the classic example of Orwellian dystopia.

Brave New World presents a much more insidious type of control. Instead of being coerced by Gestapo-style tactics, Huxley believed individuals would be managed by a seductive mixture of “consumerism, technology, and hedonism.” He warned that we would be lulled into compliance and complacency by promising the artificial satisfaction of our desires.

When Davies lines up the scenario spelled out in Brave New World with the digital world of today, the comparison goes beyond uncomfortable. It’s scary. The article explains:

Brave New World, published in 1932, envisioned a society in which the state deprives its subjects of freedom by administering a potent cocktail of consumerism, technology and hedonism. In the London of 2540 AD (or 632 AF — ‘After Ford’), 10 World Controllers exercise absolute political control. But they don’t need a Big Brother police state.  Instead, universal access to sex, drugs and leisure keep the population subdued in blissful passivity. The means of pleasure are deployed as instruments of policy, ‘for the purpose of preventing people from paying too much attention to the realities of the social and political situation’.

Serious political discourse is replaced by brief slogans, buzzwords, and catch phrases. Above all else, politicians are entertainers:

In a chapter titled ‘The Arts of Selling’, Huxley prophesies the Trump phenomenon. Troubled by the increasing use of the mass media to ‘merchandise’ politicians to the electorates, he wrote: ‘All speeches by the entertainer candidate must be short and snappy’. Only then could ‘the great issues of the day be dealt within five minutes at most — preferably in 60 seconds flat’. Television was transforming the news into a rapid and proliferating series of images, a form of entertainment that prized ‘the unreal’ and the ‘more or less totally irrelevant’. You can contest facts, he said, but not images.

‘The methods now being used to merchandise the political candidate,’ Huxley wrote, ‘positively guarantee the electorate against ever hearing the truth about anything’. The 60 seconds of 1958 is now even shorter. How much can be said in 140 characters? Ask the President.

Huxley noted that politicians increasingly appealed to the ‘blind impulses, unconscious cravings or fears’ of their subject-citizens. This kind of propaganda ‘avoids logical argument and seeks to influence its victims by the mere repetition of catchwords, by the furious denunciation of foreign or domestic scapegoats, and by cunningly associating the lowest passions with the highest ideals’. That was the Fifties. If this was political speculation then, it is reality now: #MAGA, Drain the Swamp or Yes We Can. Take your pick.

Though Huxley was writing nearly 100 years ago, he envisioned a culture dominated by drug addiction. Davies again demonstrates the parallels. In addition, Huxley foresaw a day which sex would be divorced from procreation and marketed as a commodity. Davies explains:

Which brings us to sex, perhaps the most insidious method of control in Brave New World. When the protagonist, Bernard Marx, confesses his love to an alluring colleague, he is dismayed to find her she reciting the World State’s policy on fun between the sheets: ’Everyone belongs to everyone’. This is possible because pleasure and reproduction have become totally separate activities, with eugenic breeding managed in the World State’s laboratories.

Davies’ article can be found here. He demonstrates that we do not live in Orwell’s 1984. Rather, we are dangerously close to the much more disturbing Brave New World.

We loaded up the truck and moved to “Beverly”

"Stars, Planets, Galaxies, and Life: A Universe of Awe, Challenge, and Inspiration."

This is shaping up to be a great conference @SEBTSBushCenter. Have you signed up yet? http://intersectproject.org/faith-and-science/3-reasons-you-should-attend-science-and-the-christian-faith-moments-that-shaped-history/

"Stars, Planets, Galaxies, and Life: A Universe of Awe, Challenge, and Inspiration."